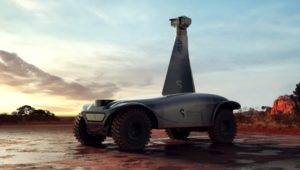 A prototype is expected to be completed early Q42020.

In sectors such as security, defence and resources drones can augment ground based sensors to provide additional range and coverage through multi-angle video through cameras and fusion of extra sensor data (e.g thermal, LiDAR).

A prototype is expected to be completed early Q42020. The ‘Drone Capability’ development is an outcome of the ON Prime: Defence Program delivered by CSIRO in partnership with Defence Science and Technology (part of the Australian Department of Defence) that Stealth completed in November 2019.

Under the Defence Program Stealth proposed to equip a fully autonomous ruggedized unmanned ground vehicle to include drone launching and landing capabilities. This would enable a flexible platform that could encompass intelligence, surveillance, and communications capabilities.

It would also be a hive, containing multiple drones capable of recharging upon return in order to maximise their utility. As a result of the Program it was apparent that the technology could be initially deployed for use in security patrol  and  surveillance  of  critical  infrastructure  facilities which Stealth  Technologies is targeting  with  its Autonomous Robotic Security Vehicle.

A prototype is expected to be completed early Q42020. Robotic Perimeter Security and Surveillance A Robotic Security Vehicle is being developed for sectors such as transport, energy, defence, government and utilities providing critical services.

Perimeter security enhances security to protect employees and assets from unauthorized intrusion in sensitive areas. The Global Perimeter Security Market is forecast to be growing quickly at CAGR of 12.0% over the forecast period 2020-2026 (reaching USD 282.26 Billion by 2025).

The Australian Federal Government has registered Strategic Elements (SOR) as a Pooled Development Fund with a mandate to back Australian innovation. Strategic Elements operates as a ‘venture builder’ where it generates high risk-high reward ventures and projects from combining teams of leading scientists or innovators in the technology or resources sectors.