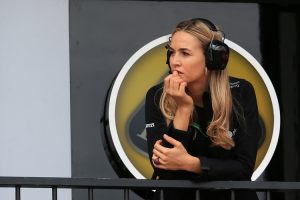 The F1 Esports Series has been created to enable fans to continue watching Formula 1 races virtually, in light of the ongoing COVID-19 situation that has impacted the live Grand Prix events.

Gfinity worked closely with Formula 1 on the conception of the F1 Esports Virtual Grand Prix series and will now oversee the delivery of the tournament, tournament operations and broadcast production.

The F1 Virtual Grand Prix will be played every weekend in place of a postponed Grand Prix.  The first race, the Virtual Bahrain Grand Prix took place on Sunday, 22 March and featured Formula 1 drivers and a host of celebrities. The Virtual Grand Prix’s are currently scheduled to take place until May and will be extended if the COVID-19 pandemic results in further Grand Prix cancellations.

The series uses the official F1 2019 PC video game, developed by Codemasters.  Each race is broadcast live from the Gfinity Esports Arena in London and will be available on the official Formula 1 YouTube, Twitch and Facebook channels.

John Clarke, Chief Executive Officer, Gfinity said: “We are excited to be involved in the delivery of the F1 Esports Virtual Grand Prix series.  At Gfinity we are committed to delivering esports solutions for our partners and we are proud to be part of the series that will bring exciting entertainment based virtual racing to a legion of Formula 1 and gaming fans around the globe.”