GCM Resources announces extension of MOU with NFC and PowerChina 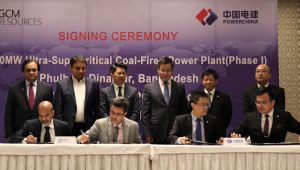 LONDON: GCM Resources plc has agreed an extension of the memorandum of understanding (MoU) with China Nonferrous Metal Industry’s Foreign Engineering and Construction Co., Ltd. (NFC) and Power Construction Corporation of China, Ltd. (PowerChina), for a further three months, on the same terms as previously announced.

The extension enables the Company to continue to progress the formation of a strategic partnership to jointly develop the Company’s proposed world class high grade coal resource of 572 million tonnes (JORC 2004 compliant) at the Phulbari Coal and Power Project in North-West Bangladesh.

In addition, the Company is pleased to announce that, further to its announcement of 17 January 2019, it has agreed the extension of the Joint Venture Agreement (JVA) and definitive Engineering, Procurement and Construction Contract (EPC Contract) with PowerChina, for a further 12 months, to 17 January 2021, on the same terms as previously announced.

The extension enables the Company to continue its progress for the development of 2×1,000MW Coal-Fired Power Plant Project at the Project site. The Power Plant proposed with PowerChina is part of the Company’s broader strategy to generate 6,000MW of low-cost electricity for the Bangladesh market utilising domestic coal, providing an estimated US$12.5 billion in foreign investment.

In relation to the formal proposal to the Government of Bangladesh, the Company is looking forward to working with PowerChina and NFC to finalise this in due course. A further announcement may be made when appropriate.

The Executive Chairman of GCM, Datuk Michael Tang PJN, stated: “The extension of the MoU with NFC and PowerChina to develop the proposed coal mine is another important milestone in the Project’s development. Our strategy is to become an impact project for the people of Bangladesh, providing low cost and sustainable electricity in-country, by combining the Company’s coal mine proposal with mine mouth power plants generating 6,000MW. Both NFC and PowerChina are highly respected global companies, and in becoming strategic partners to the Project, will, in the Board’s view, add tremendous strength and credibility to our proposal.

“I would like to thank the teams at NFC and PowerChina for their continuing support, and we will continue to work together with them to strengthen the relationship we have built, and by developing the Phulbari Coal and Power Project, to deliver substantial benefits for the Government and the people of Bangladesh as well as our stakeholders.

“I am delighted that PowerChina and GCM have been able to agree to extend the JVA and EPC Contract, and would like to express my sincere thanks to the PowerChina team for the enthusiasm shown in our partnership to date. The spirit in which both parties have worked together is a strong sign of a positive, long-term partnership.”