Worldwide smartphone shipments decline 16% in the second quarter of 2020 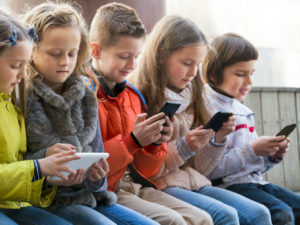 In total, companies shipped 278.4 million smartphones during 2Q20. Although this a larger decline than in the first quarter, it was expected as major economies around the globe were in lockdown for the majority of 2Q20 due to the pandemic.

In total, companies shipped 278.4 million smartphones during 2Q20. Although this a larger decline than in the first quarter, it was expected as major economies around the globe were in lockdown for the majority of 2Q20 due to the pandemic.

“Smartphones shipments suffered a huge decline in Q2 as they directly correlate to consumer spending, which had a massive reduction due to the global economic crisis and rising unemployment brought on by the widespread lockdowns,” said Nabila Popal, research director with IDC’s Worldwide Mobile Device Trackers.

“This, combined with the closure of retail stores, especially in regions where online shopping is less common, compounded the negative effect on smartphone sales. In addition, consumers spent significantly other technologies, such as PCs, monitors, and tablets, to facilitate mandatory work from home and distance learning, leaving an even smaller share in the shrinking consumer wallet for smartphones.”

From a regional perspective, Asia/Pacific (excluding China and Japan), Western Europe, and the United States declined 31.9%, 14.8%, and 12.6% respectively. China fared slightly better with a decline of 10.3% and arguably shows some early signs of market recovery. “The smartphone supply chain ground to a halt when the pandemic hit.

However, recovery, specifically in China, has been strong,” said Ryan Reith, vice president, Worldwide Mobile Device Trackers. “The question now becomes what does demand look like with so much uncertainty around the world. We have already seen OEMs moving more aggressively with their 5G portfolios both in terms of production and price points. However, we still see consumer demand for 5G being low, so the supply-side push is likely to produce very high-priced competition.”

Huawei for the first time reached the number 1 position with 55.8 million smartphones shipped in 2Q20 despite a small decline of 5.1% year over year. With the overall market declining even faster, Huawei also achieved its highest-ever share (20.0%) of the global smartphone market. This was driven by Huawei’s tremendous growth in China – almost 10% year on year – which offset the large declines the company faced in every other region. Looking forward the impact of the U.S. technology ban will continue to create uncertainty for Huawei in foreign markets.

Samsung shipped 54.2 million smartphones in 2Q20, finishing a close second with 19.5% share. However, the Korean giant suffered a 28.9% year-on-year decline, the most significant among the Top 5 vendors. While the A series continues to perform well contributing to the majority of its volume, premium devices such the Galaxy S20 and the Galaxy Z Flip, unfortunately launched in the peak of the pandemic, are facing sales challenges despite price reductions.

Apple shipped 37.6 million iPhones in 2Q20, which placed the company in third with 13.5% share of the market. iPhone shipments managed to climb 11.2% year over year thanks to the continued success of its iPhone 11 series and the timely launch of the new SE (2020). The new SE found success as it managed to effectively target the lower-priced segment, which bodes extremely well for the vendor in this time of crisis where consumers are shifting towards more budget-friendly devices. Looking ahead, the launch of four new potential models will signal Apple’s entry in the world of 5G and challenge Android 5G devices that have been out for more than a year.

OPPO returned to the Top 5 this quarter with 24.0 million units and 8.6% market share despite a 18.8% year-on-year decline. Roughly 60% of OPPO’s shipments were to its domestic market of China, which was a key factor in getting the vendor back into the top 5 globally. In China, the A series was again the volume driver while the new Reno 4 series performed much better than expected due to very competitive pricing. Meanwhile, in India, OPPO’s second largest market, the vendor faced challenges in both supply and demand with factory shutdowns and consumers facing the anti-China sentiment. 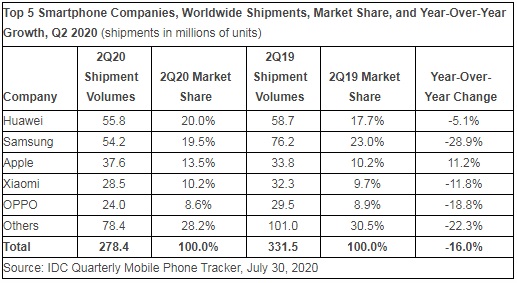 International Data Corporation (IDC) is the premier global provider of market intelligence, advisory services, and events for the information technology, telecommunications, and consumer technology markets. With more than 1,100 analysts worldwide, IDC offers global, regional, and local expertise on technology and industry opportunities and trends in over 110 countries.