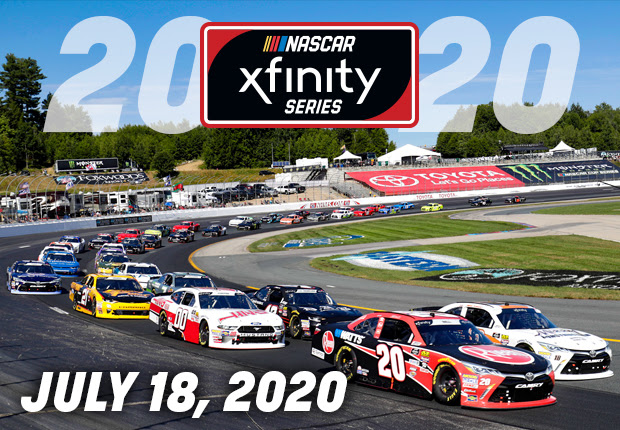 HAMPTON: Josh Williams has been building his NASCAR Xfinity Series career brick by brick over the past few seasons, and the fruits of that labor are finally starting to show themselves.

Williams, whose focus was simply on making races when his tenure began in the series, has now been able to set his sights on a new goal as his performances have improved – making the postseason and contending for a championship for the first time.

After a strong start to the Xfinity Series season, Williams and the No. 92 DGM Racing team find themselves solidly in playoff contention through seven Xfinity Series races in 2020, sitting just 15 points behind the playoff cut line heading into this weekend’s Echo Park 250 at Atlanta Motor Speedway.

“Man, it’s so cool to have good runs like we’ve been having and to be showing good speed every week,” said Williams. “I think we’re going to keep these good finishes going and try to get inside the playoffs. That’s a huge goal we’re shooting for right now and it feels good just to have a shot at it.

“We’ll try and do it without a win, but we still have a few races here – superspeedway races at Talladega and Daytona – where we can probably put ourselves in contention,” Williams added. “Right now, though, as long as luck stays on our side and we can prevent things on our end from happening, we’ll do our best to keep these strong runs rolling and keep racking up points. That’s what we need right now.”

The Bristol run marked Williams’ second-highest finish in Xfinity Series competition, as well as his best on a non-superspeedway track and his best result so far in 2020.

Williams was quick to note that he and his team expected to have those kinds of solid performances even early in the Xfinity Series season, but admitted he wasn’t sure just how the points might shake out.

“We expected to be in the top 15; I feel like that’s where we should be running. I feel like that’s a good, comfortable spot for us, and I think we’ve really shown a lot for what we have and we’ve even been able to exceed that in some cases here, early on,” Williams said. “But man, to have these couple races here and do what we’ve done just shows the speed that we have here. It’s awesome.

“I really appreciate the things that Mario (Gosselin, team owner) has done in the offseason to try to improve our program, and it’s showed. It’s definitely showing,” Williams continued. “Hopefully we can keep those good results going.”

In an effort to continue the momentum that Williams has built, DGM Racing has added Coolray Heating, Cooling, Plumbing and Electrical as the primary sponsor of Williams’ No. 92 Chevrolet Camaro for this weekend’s 250-mile event at the 1.54-mile quad-oval located just south of downtown Atlanta.

The Coolray Company of Brands, part of The Wrench Group, is the Atlanta leader in home maintenance and repair services, specializing in heating, air conditioning, plumbing, electrical and water solution services.

Their brands include Coolray, Mr. Plumber and BriteBox Electrical, and Coolray has served metro Atlanta since 1966, with a staff of more than 450 employees and offices in Marietta, Suwanee and Jonesboro.

Being able to add a locally-based, home-grown sponsor for the Echo Park 250 is something that Williams appreciates, given the tight-knit, family nature of his own squad in the Xfinity Series.

“We’re really excited to have Coolray and their brands onboard with us for Atlanta this weekend,” Williams said. “To have them come on for this race in their home market is a big deal for us and for them, and we’ll be working to give them a strong run and build on this foundation we’ve set for ourselves here over the first month of the season. People are really starting to take notice of what we can do, and we want to keep that trend going into the spring and summer months.”

Coolray was scheduled to adorn Williams’ No. 92 Camaro during the original Xfinity Series date in mid-March, just before the COVID-19 pandemic brought the motorsports world to a sudden halt.

“Coolray is proud to have served metro Atlanta since 1966, and we look forward to partnering with Josh and the DGM Racing team as they come to Atlanta this weekend to compete,” said Piercefield. “This relationship allows us with a unique opportunity to elevate our brands by aligning ourselves with a world-class sport, as well as the most dedicated fans in all of motorsports. Coolray and Carrier are proud to support Josh and the rest of the No. 92 DGM Racing team. We are thrilled to partner with them as they build on their momentum to start the 2020 season and we look forward to an exciting race weekend with the Coolray and Carrier colors on his car.”