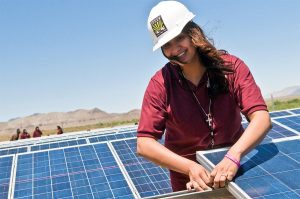 “We are excited to secure our first projects in Tunisia, supporting the Government’s target to reach 30% electricity production from renewables by 2030. We have solid experience from successful development, execution and operation of projects in Africa and the Middle East over the last years that we bring with us as we enter this new market”, says Raymond Carlsen, CEO of Scatec Solar.

The solar plants are expected to generate about 830 GWh per year, enough electricity to power more than 300,000 Tunisian households annually and contributing to avoid 480,000 tonnes of CO2 emissions each year.

Scatec Solar will be the lead equity investor in the projects. The company will also be the Engineering, Procurement and Construction (EPC) provider and provide Operation & Maintenance as well as Asset Management services to the power plants.

Since the end of 2016, the Tunisian government has embarked on the implementation of its programme for development of electricity production from renewables. In this framework the Ministry of Industry and SMEs launched an international tender for solar PV projects in 2019.